I have at various time lived and worked in Liverpool and the Wirral and not always on the same side of the river at the same time. For anyone not familiar with the area the River Mersey is a natural barrier between Liverpool and south Lancashire to the north and Wirral and Cheshire to the south. The whole region has been called Merseyside since the 1974 although the term is not universally popular, with many people preferring the historical names of Cheshire and Lancashire.

In any case the river is a great physical (and cultural) divide in the region and various outfits have been offering ways to cross it since 1318, starting with local monks, then local landowners following the dissolution of the monasteries, later still came steam boats in 1815 followed by trains through the newly constructed Mersey Railway Tunnel in 1884. In 1934 the first road tunnel between Birkenhead and Liverpool opened but just 30 years later it was congested enough that work began on another tunnel linking Wallasey and Liverpool, they now carry 95,000 vehicles per day between them.

The intrepid cycling commuter or tourist therefore has, nominally, three means of crossing the river. Let's look at each in more detail...

The Mersey Ferry - The ferry runs most days of the year, at peak time of the day it operates to a Commuter timetable and through the middle of the day to a Cruise timetable. The commuter fare is £2.10 for a single and £2.60 for a return. The ferry leaves each landing stage roughly every 20 minutes in the morning or 30 minutes in the afternoon when it also visits Woodside. To take a bicycle on board is free and very popular, being on the ferry is a nice way to start or end a day's work, there is also a good camaraderie amongst the cycling commuters. The main problem with the ferry is that if you miss it you have a bit of a wait until it comes around again, not particularly convenient.

Merseyrail - Trains run from all across the Wirral in to four stations on a loop line under the city centre. Prices vary but the very minimum fare is Hamilton Square to James St, a distance of less than a mile and taking less than five minutes, but it costs £2.30sin/£2.80ret. Due to the two stations being in different 'zones' none of the weekly or monthly tickets seem to be any cheaper. This was quite annoying for me as I would like to get a good ride in by cycling right all the way to Birkenhead rather than getting the train from one of the nearer stations, and then just get the train to hop across the river and carry on by bicycle again. But there is no monetary saving in doing this. Furthermore there are some physical issues. Some stations only have very small lifts for a couple of people, or you have to carry your bicycle on the escalator, not easy if it's a 27kg Dutch bike! The carriages on the trains are fully seated except for one little spot where two seats have been removed for bicycles of wheelchairs. Unfortunately this spot also has fold down seats which are frequently occupied and I would feel a little silly asking somebody to move so I can put my bike there for one stop.

The only remaining place then is in the area immediately in front of the doors, this is possible, but at the busiest times you might have to wait for another train if there isn't space to get in. Also parking in from of the doors has on at least one occasion led to me being told off by a lady for blocking the exit (although I was getting off at the next stop).

The trains are made up of three carriages, if I had my way I would remove all seating from one of the carriages, this would allow a lot more people and bicycles on.

The Mersey Tunnels - With regard to cycling through the Mersey tunnels the rules are...

Bicycles are not permitted through the Kingsway [Wallasey] Tunnel. Through the Queensway [Birkenhead] Tunnel, they are not allowed between the hours of 6:00am to 8:00pm, Monday to Friday, 7:00am to 8:00pm on Saturday and 8:00am to 9:00pm on Sunday. Please note, the time limits during a Sunday are only operational between 1st April and 30th September inclusive.

The mid week time restriction effectively makes cycle commuting through the tunnels impossible for most day workers, I've done it a few times before 6am but it's not a particularly pleasant experience. Head down, go like a bullet and get out as fast as possible. What's most annoying though is that going through the tunnel is toll-free for bicycles making it the only free way of crossing the river. The toll for cars is £1.50 each way making this cheaper than a single on either the train or ferry. 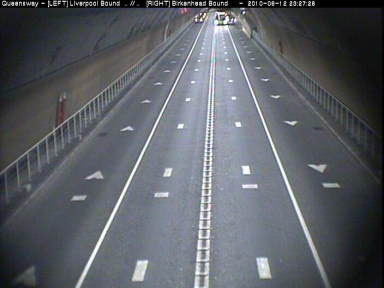 For all commuters each mode has its own disadvantages which ought to make price the deciding variable, but the return price for each, £2.60/£2.80/£3.00 are so close that people probably choose their mode of transport for other reasons. I expect many people with the convenience of a free parking space at their destination will choose to drive. The ferry passengers seem to like the fresh air and a natter. The people on the train are grumpy, in a rush, sleepy, hungover or just plain anti-social.

As a cyclist I would prefer not to have to stop, get off and take a train or ferry then start riding again ten or fifteen minutes later, riding through the tunnel would be preferred if it were safe, but that would require a leap of imagination that I fear is beyond Mersey Tunnels, converting the two outside lanes of the Birkenhead Tunnel into cycle lanes, not something they are about to do to satisfy an unproven level of demand that probably isn't there anyway at the moment.

The second option which should be achievable is reducing the fare between Hamilton Sq and James St to £2 return and making some of the carriages more cycle friendly.